Flashpoints: The Emerging Crisis in Europe 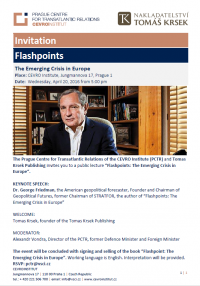 On April 20, the Center for Transatlantic Relations of the CEVRO Institute (PTCR), in collaboration with the publisher Tomas Krsek s.r.o, organized a public lecture with an intelligence expert, founder and chairman if Geopolitical Futures (www.geopoliticalfutures.com), and a former chairman of STRATFOR, Dr. George Friedman. Part of the event entitled “Flashpoints: The Emerging Crisis in Europe" included book autographing. The lecture started and the speaker introduced PCTR Director Alexandr Vondra, who also moderated the subsequent discussion.

George Friedman began his lecture with the story of Europe, a continent which has given the world many beautiful things and conquered both nature and reason. But then came a period of mutual distrust and fear, when a united Germany was a risk to the power-sharing arrangement of the time. This culminated in a devastating world war, which confirmed the Enlightenment idea of the unrestricted human mind - what was previously unthinkable suddenly became possible. It turned our capability to murder  not only exceeds the boundaries of civilization, but also common sense.  World War II then ultimately destroyed the European empire in the world.

Subsequently, there came the question of how to get Europe back on its feet. At that time, the search for answers involved the United States with the idea of European integration, as Europe clearly could not survive with competing nations. Efforts to hold back Americans and the Soviet Union were one of the roots of the future European Union. But the path to a united Europe was not easy. The second smallest continent is characterized by a large number of nations with different languages, religions and a long mutual history. In the 1990s, there were to two key moments - the collapse of the Soviet Union and the signing of the Maastricht Treaty. It then seemed that Europe was united again, and EU membership for the countries of the former Eastern Bloc became a symbol of the return to Europe.

The problem according to George Friedman is that the EU does not seek to be an effective alliance, but in some ways mimics the USA. In this context, it should be recalled that the United States underwent a bloody civil war which unambiguously determined whether individual states have their own sovereignty. In Europe, however, this failed to resolve satisfactorily. There is no European nation, and EU is only an organization and not a nation-state. The inability to effectively cope with the financial crisis in many states has increased political tension. And because every politician will follow the will of their voters, the important of nation states has been renewed again in Europe. At present, everyone turns to Germany, which is expected to solve the current problems. According to Friedman, Germany as the center of European integration is the problem itself.

Germany was also the subject of the first question from event moderator Alexandr Vondra. George Friedman said the fact that German officials will always act in the interests of Germans, otherwise they will lose voter support. Germany will therefore act in the spirit of their interests, which could threaten the interests of, for example, France and Poland. Other questions addressed issues such as migration and terrorism. George Friedman said that the real problem for Europe is not migration, but the lack of a clear decision-making process. It is replaced by a constant effort to shift responsibility to someone else. Friedman sees the cause in the absence of a common interest of the European Union, which would prevail over the interests of individual states.

Several questions also concerned Russia and Ukraine, or Turkey's future status. An important issue was the possibility of repairing Transatlantic relations. George Friedman acknowledged that Americans have a problem with NATO. According to him, there is no reason why Europe should not be stronger. The basis of the military alliance should be a military power, and NATO needs real skills. According to Friedman, in the future the United States will concentrate more on agreements with individual European countries. If we want to keep NATO, we have to at least adhere to its commitments.

The public lecture was held with the kind support of publisher Tomas Krsek. We also thank our media partners for the event, the Czech-Israeli Chamber of Commerce, the Civic Institute, Aligier s.r.o, and Geopolitical Futures.

The following day, Thursday, April 21 there was an autograph session for at the Palace of Books Luxor for Flashpoints: The Emerging Crisis in Europe, authored by Dr. George Friedman. Roman Lesny, owner of the publishing house Aligier who participated in the publication of the book, opened the event. PTCR Director and former Defense Minister and Foreign Minister Alexandr Vondra then introduced George Friedman and welcomed the guests.

You can find media coverage from the event at the following links: