Freedom and Security in the Age of Jihad 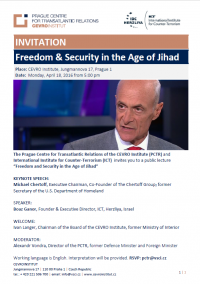 On Monday, April 18, the Prague Center for Transatlantic Relations at the CEVRO Institute (PTCR) and the International Institute for Counter-Terrorism (ICT) held a public lecture entitled "Liberty and Security in the era of jihad" in the atrium of the CEVRO Institute. The keynote speaker was former US Secretary of Homeland Security and founder of The Chertoff Group, Michael Chertoff. The conference continued with founder and executive director of Israel's International Institute for Counter-Terrorism (ICT), Boaz Ganor. The lecture was opened by the Chairman of the Board of the Institute CEVRO, Ivan Langer. PTCR director Alexandr Vondra then introduced the speakers and moderated the discussion that followed. The theme of the lectures were current challenges in the fight against terrorism. Both speakers are mainly devoted to concrete action in the fight against the current so-called greatest threat, the Islamic State (ISIS).

According to Michael Chertoff, ISIS represents the third wave of international terrorism. After attacks by the centralized and hierarchically-managed organization al-Qaeda, there was a wave of synchronized, minor assaults modeled after the Mumbai attacks of 2009. Michael Chertoff describes current wave of terrorism as "dedicated, crowd funding platform" terrorism, which for a common goal - as is the case of forms of financing - can contribute a large number of very organized individuals. Changes in the organization of terrorists and terrorist organizations should then correspond to a change in the approach to fighting against them. According to Michael Chertoff, it is necessary  to liquidate the terrorist stronghold through military action in Syria and Iraq. At home, it is important to gather, analyze, and share information about the activities of the so-called "foreign fighters" or the possibility of radicalization of individuals. In this respect, it is more key for communities and local police to report suspicious activities than to focus on satellite images and other advanced equipment. Former Secretary Chertoff also emphasized the role of social media successfully used by terrorists to recruit new supporters, and how social media should therefore better be used in our favor in the fight against terrorism.

According to Professor Boaz Ganor, key to freedom and security in the era of jihad is mastering the art of fighting terrorism. We firstly need to know who the enemy is, and to recognize the rationality and motivation of terrorists. On this occasion Boaz Ganor called terrorism a matter subject to fashion, where new organizations are created that refer to themselves as "right". As the third pillar in the art of combating terrorism, Professor Ganor described reaching the same level as terrorists. Just as the success of a terrorist act depends on the motivation and operational capability of terrorists, an effective fight against terrorism is determined by the motivation and operational capability of anti-terrorist forces. Another point he mentioned was solving the dilemma of democracy, which stands between the values of liberal democracy and an effective fight against terrorism. As a final point, Boaz Ganor mentioned the ability of the public not to be conquered by terrorism.

The questions in the subsequent discussion concerned, for example, the current migratory crisis and its risks. Both speakers agreed that the key is to deal with the situation in the areas where problems arise, even by military action. Vice-Rector for International Relations at the CEVRO Institute, Tomas Pojar asked the two speakers about the three most important steps that Europe should now take. According to Michael Chertoff, it is necessary to make sure that all states have the sufficient ability to run an effective mechanism for sharing information and, on the basis of this information, carry out operational activities. Boaz Ganor called the greatest challenge the "migration wave." According to him, Europe should be more selective while improving the integration of immigrants in order to avoid the known problems of the second generation. The Schengen area should be repealed and a European counterterrorism office should be established, part of which would also be an operative component.

The final question was asked by former Czech Foreign Minister Karel Schwarzenberg, who recalled the similarity between ISIS and Nazi ideology, which also was also very attractive to young men at the time. Professor Ganor added that terrorism is not a new phenomenon, but religious terrorism is one of the most dangerous because it presents its objectives and procedures as God's will. Every religion can be abused, and the current problem is not with Islam but within Islam. Therefore, it is primarily left to religious leaders to explain to Muslims that what they are doing in the name of jihad terrorists is inconsistent with Islam.

The public lecture was held with the kind support of the International Institute for Counter-Terrorism (ICT) at the university IDC Herzliya. We also thank our media partners for the event, the Czech-Israeli Chamber of Commerce and the Civic Institute.

Media coverage of the event may be found in: