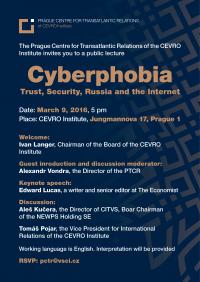 In an introduction to the lecture, guest of honor Edward Lucas talked about the seriousness of linking cyber security and threats from the Russian Federation. He has written about the in his book Cyberphobia, where he reveals the severity and potential possibilities for Russian conduct of cyberwarfare. Mr. Lucas also pointed to the growing dissatisfaction with the trend in Russia since the 1990s, when many, including President Havel, expressed concerns about international security, especially given the close proximity of the Czech Republic to the Russian Federation. The main topic of the lecture was the value of information and protecting sensitive data. Edward Lucas drew attention to the fact that most people prefer convenience over security, especially in terms of developing new programs and applications. He argued that each person must learn to control what they publish on the Internet and social networks, and also to decide whether to share information about their private life.

The main conference host pointed to the core essence of the Internet, which was developed for the purpose of sharing information and flexibility, not to abuse and or steal information. This comment raised the issue of "Internet police" that would patrol for compliance with certain laws and limits of the Internet, punishing abuses. Currently, according to Mr. Lucas, the Internet is a hacker's paradise and larger or smaller groups can use it to attack and gain valuable information from a wide range of potential targets. Edward Lucas also highlighted the possibility of identity theft and remarked on how easy it is to confuse even high-ranking officials (citing specific cases at embassies), ​​then called for greater caution in verifying the origin of information. IT Center Director of the CEVRO Institute, Ales Kucera, pointed to the fact that we do not know where the data collected about ourselves actually ends up and who is subsequently able to read it. He warned against vulnerableness central registers kept by the state and concentrations of sensitive data. Vice Rector Tomas Pojar drew attention to recent cases of hacking breakthroughs and the importance of their own security audit, where both the company and the state must have sufficient security for processed data, whether internal or external, and audit weaknesses regarding cybersecurity and data handling.

The discussion then fell to questions about the morality of monitoring and data collection, and whether it has helped us prevent terrorist attacks aimed at Western countries, such as the attacks which recentlty occurred in Paris. Speakers agreed on the fact that without the existence of data, there would be far more attacks. Mr. Pojar specifically pointed out that in liberal democracies, compared with Russia, the collection of data does not translate to data abuse. If a Western country is attacked, for example, it always turns to an ally with information in order to pinpoint responsible parties. The debate also answered a question concerning the collection of data on social networks and its relationship to propaganda, which the speakers responded to by referencing the Ukrainian conflict. There, with the help of volunteers, a portal was created to verify and identify misinformation coming from the Russian side. Generally, according to the speakers, social networking is a double-edged sword.

The lecture was held with the kind support of Hanns-Seidel-Stiftung (HSS). The media partners of the event were the Czech-Israeli Chamber of Commerceand the Civic Institute.

You can find more media coverage of the event below: